SERVPRO GIVES BACK TO THE COMMUNITY WITH SOLES4SOULS 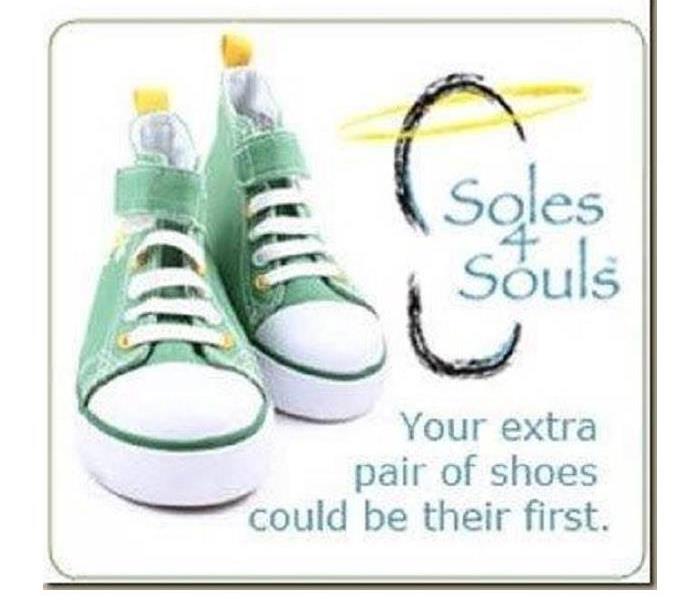 SERVPRO is giving back to the community through SOLES4SOULS

SERVPRO® of Gwinnett County South along with many SERVPRO® Franchises are planning a drive to collect 10,000 shoes to help the poor.  The used and new shoes can be dropped off at schools and local churches.   We will be collected shoes between January 1, 2017 and March 31, 2017.

The shoes that SERVPRO® collects will be delivered to Soles4Souls—a not for profit global social enterprise committed to fighting poverty through the collection and distribution of shoes and clothing.  This organization which was founded in 2006 has distributed more than 26 million pairs of shoes in 127 countries.  SERVPRO® is a strong supporter of Soles4Souls’ anti-poverty mission, and we hope to take a big step in providing the organization with the used shoes they require to keep making a difference for people in need.

Soles4Souls will convert every pair of shoes collected from the community into a value-added social currency to achieve positive change, both humanitarian and economic.  Most of the gently used shoes will be distributed to microenterprise programs that create jobs in Haiti and other poor nations.  The resulting revenue will help fund the free distribution of new shoes in the U.S., Canada and developing nations around the world.

“The simple truth is that almost anyone with a closet has shoes they don’t wear, or an old pair that will just end up in a landfill,” said Neal Thompson.  “Give those to us, and know that you are taking a step to making the world a better place for all of us.”

Our SERVPRO® Franchises will be asking schools, faith-based institutions, civic organizations and corporate partners to partner with us in collecting shoes, new and old.  We in turn will send them to Soles4Souls for distribution to those in need.  Based in Nashville, Tennessee, Soles4Souls is committed to the highest standards of operation and governance.  Please visit www.soles4souls.org for more information.